The different types of APIs

An Application Programming Interface can be thought of as the way in which programs communicate with each other, accessing data and functionality despite being separate systems. This kind of integration allows for the easy extension of application functionality such as, for example, adding multiple payment methods to a site, integrating social media posts or simply sharing the current weather. APIs make this effortless, leading to more powerful applications.

APIs may be categorized according to these parameters, which will be briefly discussed below:

There are four ownership types of Web APIs: Open APIs, Partner APIs, Internal APIs and Composite APIs. Ownership APIs are freely available for public use without restriction. These are also referred to as ‘Public APIs’.

Third, we have Web service APIs. These APIs use a unique address, called a URL, on the internet to provide access to their services. Web service APIs are categorized according to the type of communication and method of building the API. These categories are:

Working with APIs in Linx

There is a significant difference between a RESTful API and an HTTP API. A RESTful API adheres to ALL the REST constraints set out in its “format” documentation. An HTTP API is any API that uses HTTP as their transfer protocol. This means that even SOAP can be considered an HTTP API, as long as it will use HTTP for transport, but most HTTP APIs will make more and better use of the infrastructure and possibilities of HTTP. Most HTTP APIs can be very close to becoming a truly RESTful API.

Many believe REST and HTTP seem to be hand-in-hand. After all, the web itself runs on HTTP, and it makes sense, a RESTful API does the same. However, nothing in the REST constraints makes the usage of HTTP as a transfer protocol mandatory. It’s perfectly possible to use other transfer protocols like SNMP, SMTP and others, and your API could still be a RESTful API.

However, in practice, the majority of RESTful APIs currently use HTTP as a transport layer, since the infrastructure, servers and client libraries for HTTP are widely available already.

Developing, hosting and publishing your own API can be time-consuming and complicated. But this does not mean you can not take advantage of the “API economy”. Many of the new SaaS tools on the market are doing nothing more than assembling REST-based web services into powerful applications. A good low-code platform lets you use that same strategy, or quickly create new business objects that meet your own custom data requirements and validation rules. A common use case is building a low-code application that has some integration with an existing enterprise application or into a new cloud-native application. Using a visual development tool such as Linx that easily consumes those applications via REST APIs is hugely effective in doing so – and quickly. 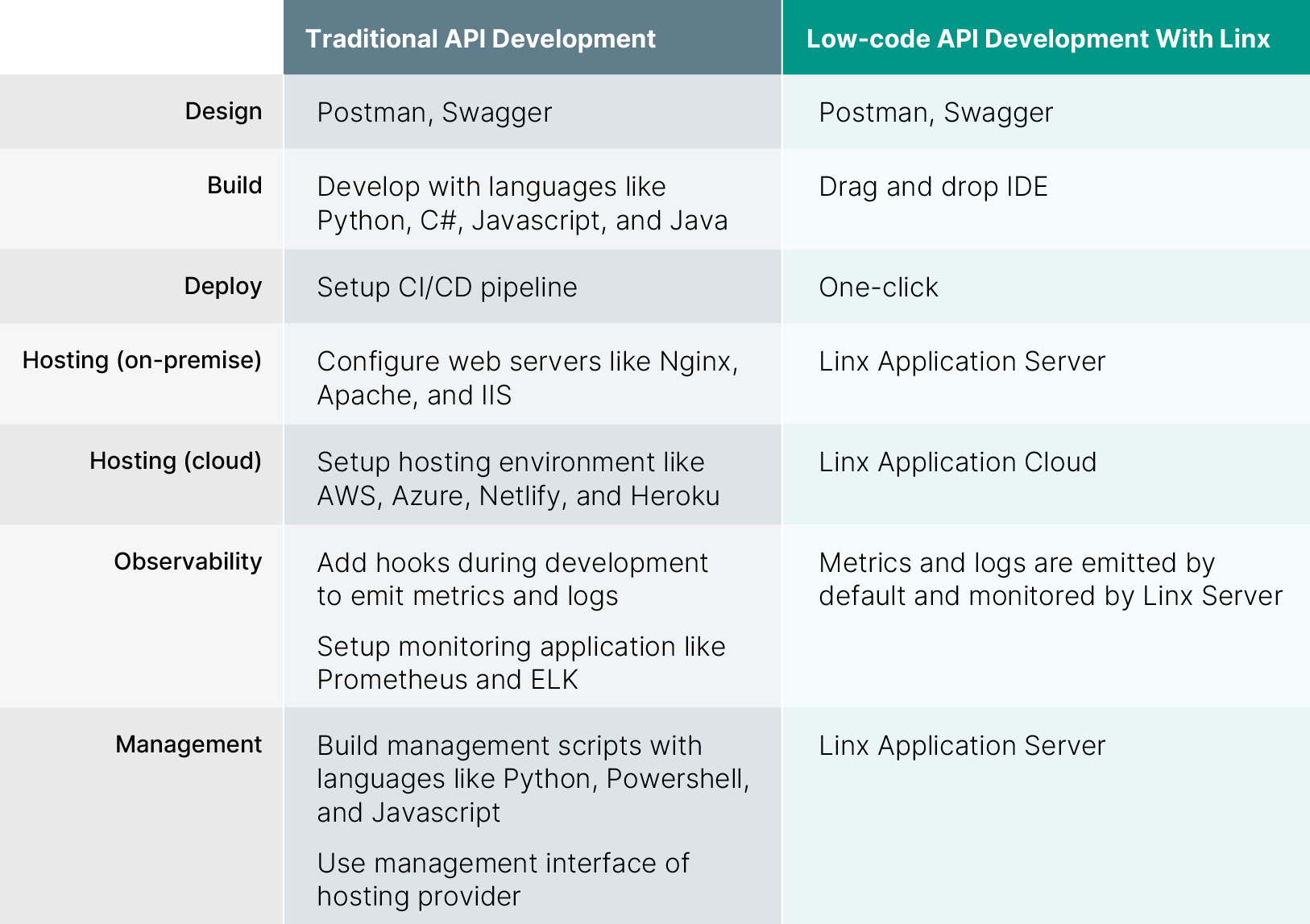 Further reading: Why low-code and APIs are the perfect match

Tags: API | API development | Programming | REST APIs | Web services
We use cookies to ensure that we give you the best experience on our website. If you continue to use this site we will assume that you are happy with it.OkLegal docs